Fujairah Fine Arts Academy announced the names of the winners in the Fujairah International Competition for the Art of Arabic Calligraphy. The competition was organized under the patronage of His Highness Sheikh Mohammed bin Hamad bin Mohammed Al Sharqi, Crown Prince of Fujairah, Chairman of the Academy of Trustees, with the participation of 114 calligraphers representing more than 26 countries in the world.

The competition was held remotely online, the participants sent their artworks to the Academy’s website and social media accounts,where the artworks were presented to a honourable and prestigious jury, the performance of the participants was evaluated and the final results were approved with the addition of three appreciation awards.

His Excellency Ali Obaid Al Hafiti, Director General of the Fujairah Academy of Fine Arts, stated the importance of the Fujairah International Competition for the Art of Arabic Calligraphy, in attracting calligraphers and talented people in this art form and motivating them to create and produce works of art, pointing out that a number of paintings participating in the competition were a beautiful abstract style that showcased the different types of Arabic calligraphy.

Al-Hafiti said: Organizing the competition provides calligraphers with an academic platform, through which they display their various types of calligraphy art, and opens the way for participants to interact with this competition, which is a cultural support for Arabic calligraphy competitions, noting that the competition includes elites of distinguished arbitration committees in the Arab world.

The Director General of Fujairah Fine Arts raised the highest signs of thanks and appreciation to His Highness Sheikh Mohammed bin Hamad bin Mohammed Al Sharqi, Crown Prince of Fujairah, for his continuous generous guidance for all artistic activities held by the Fujairah Academy of Fine Arts.

Second and Third Place shown below: 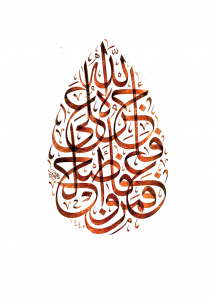 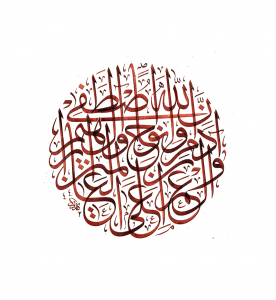